Myeloma – What is it? 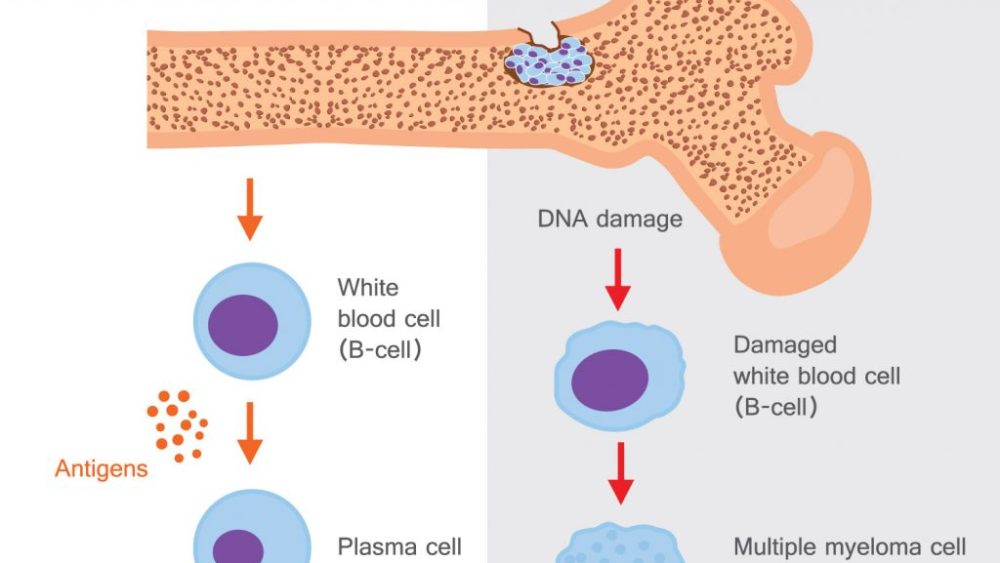 Myeloma- what is it?

Myeloma, also known as Multiple Myeloma, is a type of cancer that develops from cells in the bone marrow called plasma cells. Bone marrow is the spongy tissue found inside the inner part of some of our large bones. The bone marrow produces different types of blood cells.

(Medical Definition: Myeloma is a neoplastic plasma-cell disorder that involves clonal proliferation of malignant plasma cells in bone marrow, monoclonal protein in the blood and urine, and involved organs).

Myeloma can develop wherever there are plasma cells. So it can be anywhere there is bone marrow, including the pelvis, spine and ribcage. As it can develop in several places in the body, it is often called multiple myeloma. 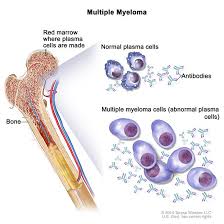 To understand why myeloma affects you the way it does, it helps to understand how blood cells are normally produced and what they do.

Usually bone marrow makes blood cells in a controlled way, when your body needs them. All blood cells start as the same type of cell, called a stem cell. As they develop (mature), they turn into one of three types of blood cell:

Plasma cells develop from a type of white blood cell called B lymphocytes. In myeloma, too many plasma cells are made and they are all of the same type. (Monoclonal cells)

They crowd the bone marrow. This means that there is not enough space for making normal white cells, red cells and platelets.

(Definition: Monoclonal cells are a group of cells produced from a single ancestral cell by repeated cellular replication. Thus they can be said to form a single clone).

How does myeloma develop?

Myeloma develops initially when an embryo cell, a rogue dysfunctional cell formed in the liver, is carried into the bone marrow, where a change in the DNA of the plasma cell takes place. DNA is the instructions for the cell so it knows what to do and when. The change happens to the DNA when the bone marrow is making new plasma cells. The abnormal plasma cell then produces more abnormal cells, know as monoclones. (As above) These are myeloma cells.

The myeloma cells produce an abnormal form of one of the types of antibody. You might hear your doctor call the antibodies: proteins, paraproteins or a monoclonal spike. Consequently, they aren’t able to work normally and so can’t help fight infections.

The paraprotein is often found in the blood and urine if you have myeloma. Blood and urine tests are a way of diagnosising and monitoring myeloma.

Unlike many cancers, myeloma does not exist as a lump or tumour. Therefore, most of the medical problems related to myeloma are caused by the build-up of abnormal plasma cells in the bone marrow and the presence of the paraprotein in the body.